Mexico is one of the most important countries when it comes to the usage of on board courier services for time-critical shipments, and the automotive industry is one of the strongest sectors. The country offers an attractive environment for automotive manufacturers and suppliers, leading to a competitive advantage for many international companies in this industry.

In Mexico, the demand for flexible logistic solutions to transport time-critical components and spare parts is increasing, evidential in Chapman Freeborn OBC’s rise in daily enquiries from automotive companies to transport from Mexico to the United States.

The most important hubs for OBC shipments are Mexico City (MEX), Querétaro (QRO), Del Bajío (BJX), Chihuahua (CUU), and Monterrey (MTY) in the north of the country.

17:00 The OBC team receives a telephone enquiry for the transport of important spare parts for automotive production from Guadalajara, México (GDL) to an automotive plant in Detroit. The freight consists of 48 packages (45 kilograms each) and must be collected within 3 hours.

17:15 The client receives a detailed quote for the shipment 15 minutes after the incoming order. After the clients approval, the OBC team book the flight tickets and additional ground modes of transport.

03:00 The courier arrives at Guadalajara airport (GDL) and completes export formalities for the shipment.

06:37 The flight departs on time on its way to the United States.

08:50 During the transit to Houston the courier clears the shipment with the provided entry number provided by the client. Afterwards, the courier passes the check-in for the connecting flight to Detroit.

16:50 After landing on schedule in Detroit, the courier starts the journey to the receipient via private ground transport

18:00 The courier arrives at the production site and delivers the urgently need spare parts to recipient personally. The courier sends a copy of the POD (proof of delivery) email to the client. 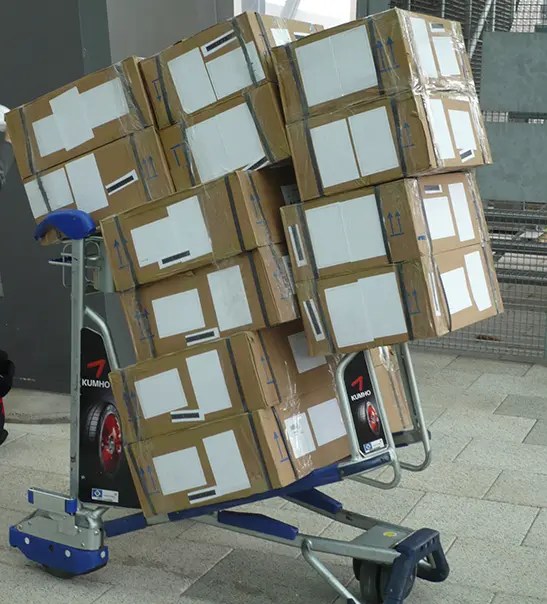 On board courier completes round-the-world assignment in 4 days

Our On board courier (OBC) team in Cologne recently organised a hand carry operation that involved a full circle route around the globe.