High fashion is traveling with Chapman Freeborn OBC in style

In February our on board courier (OBC) team in Cologne received an urgent request. The very next day, valuable fashion items had to be picked up in Paris and transported as quickly as possible to a photoshoot in Central America.

The freight consisted of several oversized boxes with a total weight of 250 kg. Most of the boxes were very bulky and had to be checked in, with only one box small enough to be taken on board by the couriers as hand luggage.

The transport involved multiple couriers, due to both the size of the shipment and security regulations.

A particular challenge was the stopover in the United States, as the bulky cargo had to be moved from one terminal to another. 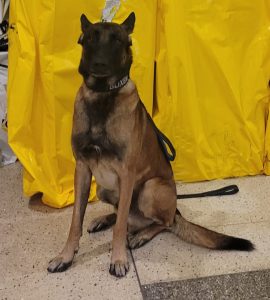 Very special "security staff" helped to guard the cargo during the stopover. Blixem, a German Shepherd belonging to a local courier, ensured that the valuable clothing was left untouched and could safely make the onward journey to its destination.

The OBC team successfully completed the entire transport in record time. There were only about 24 hours between the collection of the freight and the delivery at the destination.

The client was very pleased with the timely delivery of the luxury clothing and will be very happy to use Chapman Freeborn On Board Courier service again for their next fashion project.

On a Friday afternoon, the Cologne team was contacted with an urgent request. The shipment consisted of two small boxes with spare parts for a vessel.

The Chapman Freeborn OBC team in Hong Kong has demonstrated its ability to quickly adapt and change its delivery solutions based on the customer’s needs.