Following our recent infographic on the global automotive industry driving on board courier demand, we take a look at why China is one of the most exciting markets for hand-carry shipments.

Automotive manufacturers are currently investing in building more production plants in China than anywhere else in the world, attracted by the promise of a market which continues to grow year-on-year.

Barely a week goes by without another big announcement by one of the industry giants. For example, Ford Motor Company – which sold over a million vehicles in China last year – recently revealed it will launch 15 new models in the country by the end of 2015 as part of its accelerated growth plan.

The US auto company’s expansion has now made Chongqing in Southwest China its largest manufacturing location outside Michigan, and placed it in the fast lane alongside other leading foreign car brands like Volkswagen, Nissan, Daimler AG and BMW – all competing for a larger slice of the market. 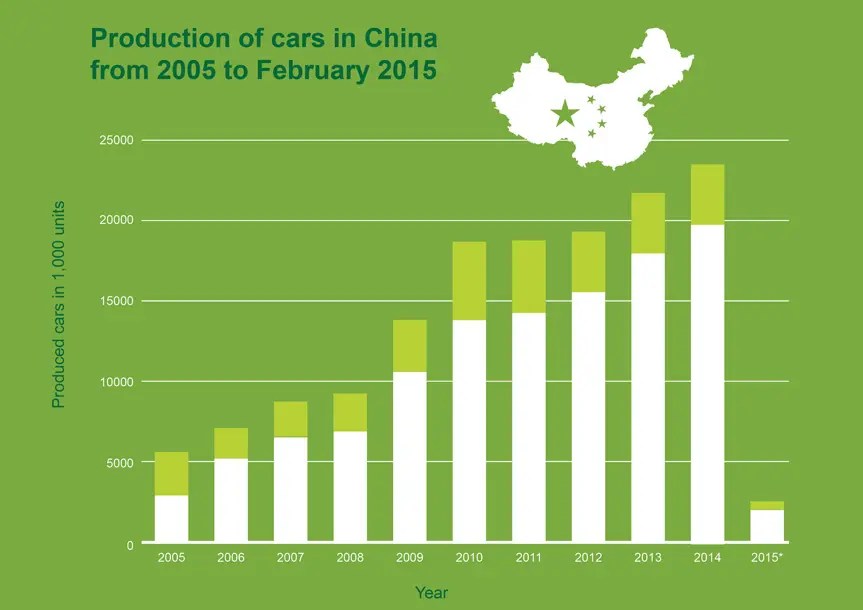 Perhaps more so than anywhere else in the world, the Chinese market also reveals rapidly evolving consumer tastes.

For example, following an initial surge in demand for smaller economical vehicles, a wave of second-time buyers are now ready to upgrade to larger vehicles – forcing manufacturers to rethink their long term growth strategies.

While the sedan market is still the main battleground for manufacturers in China, one of the most striking trends of the last three years is the tripling of SUV sales, with popular domestic models like the Great Wall Haval H6 and Chery Tiggo featuring alongside foreign models like the Volkswagen Tiguan and Honda CRV.

According to Nikolai Bergmann, Global Business Development Director at Hong Kong-based Chapman Freeborn OBC, the company’s on board courier services are a natural fit for the automotive market:

“There’s no question that China’s automotive industry is a fast moving business – with production plans constantly adapting to meet changing demand. Like elsewhere in the world, automotive manufacturing in China is on a just-in-time (JIT) basis which means on board courier services play a key part in keeping plants running.”

Indeed, many automotive manufacturers pursue a lean supply chain which seeks to develop a value stream to eliminate waste. However, the downside of trim inventories is its heavy dependence on the supply chain to ensure production is always in motion.

“China has some of the most high-tech production plants in the world, but supply chain setbacks inevitably still occur. Sometimes it can be down to a technical malfunction which requires us to deliver a time-critical replacement part – or it can be something happening elsewhere in the world impacting a supplier of parts.  A good example of this is the recent West Coast port slowdown in the US which saw automotive cargo caught up in the gridlock.”

“These are the sort of scenarios where our on board couriers can step in to help with a hand-carry solution – and why we do so much business to and from key locations like Shanghai, Wuhan and Shenyang. Our couriers have the necessary passports and visas in place, and import and export clearance hurdles are minimised for clients.”

The world of electronics is a fast and ever-changing business: the very nature of the industry dictates that today’s ground-breaking technology may be outdated within months as the market continues to propel itself off the latest high-tech advancements and innovations.

The global automotive supplier market: A driving force behind on board courier (OBC) demand [INFOGRAPHIC]

With the value of the automotive supplier market set to reach 620 billion euros this year, on board courier (OBC) services are increasingly becoming a key part of the global supply chain.